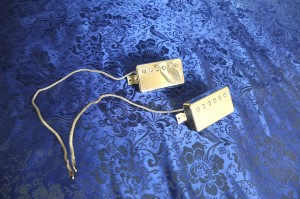 Here’s the culprit… a Gibson Humbucker (or 2)!

DISCLAIMER: Before we get too far down the “rabbit hole” when discussing the ins and outs of humbucking pickup tone, I would respectfully suggest, should your head start to spin when overburdened with all these bizillions of small details , that you set it all aside for a bit and learn how to play the guitar. The best tone isn’t worth #$@% if you can’t play. I might add that I am currently looking in the mirror as I type these words!!! Ultimately, it’s about THE MUSIC! …END OF DISCLAIMER!

OK … got that over with, now let’s talk about humbucking pickups. I have really been exploring the tones for a couple of years now. To get the ball rolling let me start by saying that it should be noted that certain sets of pickups mate well with certain guitars. For example, the PAFs that were in the “Stills” Les Paul when I got it – a set of ’61 (ish) short magnet PAFs sounded fundamentally different when I swapped them to another LP. Short magnet PAFs do tend to sound quite bright. I had some in my ’61 SG/Les Paul (they were original to the guitar). Now in the case of the SG, I tried a set of Sheptone Tributes. These are a bit darker sounding, and they sounded stellar in the SG – a guitar that is “bright” by design. Those Sheptones actually sounded better to me than the short magnet PAFs – go figure! They also sounded amazing in my 1994 McCarty. But the Sheptone Tributes really did not “turn my crank” in a single cut Les Paul. So there’s one thing… it very much depends on the marriage of guitar to pickups!

I recently installed a set of long magnet PAFs in my 2011 Gustavsson Bluesmaster. Tone chef Pete F. and I noticed that these pickups had…  1. A percussive quality and…   2. And ability to “clean up” extremely well with a lighter attack. These qualities really weren’t as present in the other Gustavssons that we used for comparison. Those other two guitars had Peter Florance Voodoos in one and Duncan Seth Lovers in the other – both superb pickups in their own right. But definitely not “PAF” clones.

One of the advantages of modern boutique pickups is that you can get away from that typical range of PAF tones… plus, you can split the coils. We all remember the coil splits that have (to quote JR from The Sandbar, Canada) that “doink-doink” sound. Not so good. But my beloved DGT Standard has killer splits… pretty much like a Tele when the bridge pickup is split. I might add that I compared my DGT to my ’61 ES-335 with PAFs and the DGT sounded tonally very, very similar – but just louder and more gainy – kinda like the 335 on “11” or maybe “12”! Then I remembered that Paul Smith and David Grissom used Grissom’s beloved 1959 ES-335 as a benchmark when designing the pickups in the DGT. Makes sense – another piece of that puzzle!

I tend to agree with PF’s assessment of the pickups that he has evaluated in his post, but I’ll give some opinions… forgive the repetition…

Mike Turks – big and clear – best of both worlds. Neck and bridge are perfectly balanced. Neck pickup is warm, yet it “cuts” and is great for soloing!

Throbaks – quite bright and often microphonic to the point of being a use-ability issue.

Voodoos – lots of heat and compression, I like ‘em. Nasty!

Burstbuckers – these are a moving target. They keep changing the formula. The “Bloomfield’ LP pickups are a case in point… amazing! I have BBs in my ’55 Wraptail LP Custom and I wouldn’t change them. Early BBs can sound overly thin, bright, ice-picky IMHO

Duncan Seth Lovers… great but bright… sometimes not the best in the bridge, but sometimes just dandy!

Duncan ‘59s – the clarity and balance of Alnico 5. A great buy on a budget. Can sound stellar in the right guitar.

PRS DGT – Like a hot PAF although the neck pickup is very traditional in output and tone. Great splits!

Duncan Bonamassa’s – Great vintage tone. A bit understated. No ice-pick. Very easy on the ears. Patterned after one of Joe’s favourite vintage sets.

I could go on and on with more pickups… but I think that’ll do for now!!! Time to practise (or maybe I’ll just have a nap!)