I suppose the hottest thing in the world of guitar forgeries (maybe that’s too criminal a word) are the Gibson Les Paul replicas. Jeeze, you can pay a ton of money for them – Max Les Pauls come to mind – and they seem to fill a niche that, for example, Gibson hasn’t been able to fill (although I might argue that they are getting closer – but will the 2 piece “lam” fingerboard terminate all that?).

Anyway, one might assume that the guitar companies “victimized” by such practices have the moral high ground, but I would argue that it’s all about following the money trail. Case in point: Slash’s main “Les Paul” in the early days was in fact a replica made by luthier Kris Derrig (it’s OK – he’s dead). Do you think the big “G” cobbled together a “cease and desist” order? … Sorry… Didn’t happen. Slash sold millions of guitars for them by being the poster boy for Les Pauls in a time when they weren’t enjoying alot of popularity! But if you’re a small builder, and you want to build a few “‘bursts”, you probably fear the cease and desist letter from the mighty “G”. Hey, the El Presidente at G is a LAWYER by trade. We all remember when G sued PRS for their single cut because we were all going to run out and buy PRS Singlecuts – thinking that they were really Les Pauls! Well, PRS did even have to stop building Singlecuts for a while – until they were vindicated. This lawsuit was NOT good for guitar players! But then, as I said, the boss at Gibson was a lawyer… and have you ever heard him play guitar? I have. Nuff said!!!

It’s interesting that at one point a judge ruled that it’s the headstock shape that determines the individuality of a guitar. That’s why companies can copy, say, a Fender Stratocaster down to the last detail – as long as the headstock is different! Good news for Suhr and Anderson.

There are rumours that many of the Gibson guitars built for Billy Gibbons were actually built by John Bolin (who we know does build many of Gibbons’ guitars) – even ones with Gibson logos. Would Gibson care? Don’t think so. It sells Gibson guitars. I believe that some of Billy’s Gretsch guitars have been built by Bolin (hey gang, the guitar that graces my website banner is a REAL Gretsch Billy Bo aka: Jupiter Thunderbird – just re-fretted, Bigsby added, Powertrons changed to FilterTrons by TV Jones and masterfully pinstriped by Dave Connery of Toronto’s Connery’s Custom Paint – the only guy I know who blasts Hendrix in the shop while he paints!) But I digress…

So if you’re a small builder building high quality replicas who do you fear more? … Blue Oyster Cult’s “Reaper” or the Cease and Desist Order? I’ve heard rumours, but I’ve never actually seen such an order. I remember a few years back when I got a magnificent Strat body that had been painted as an exact replica of Clapton’s Crash “Over The Rainbow” Strat. I put Fender parts on it and bought a superb Fender Custom Shop maple neck off ebay (for a lot of money!). It was a great axe! When I went to sell it on ebay, they pulled it off. Jeeze, this is a real Fender, I thought. There were rumours that Fender was scrutinizing ebay at that time. I put it back on and tried to explain my position by email. They kicked me off ebay for 2 weeks. Hey, WHO”S THE CLIENT, I thought? Me! I pay the ebay fee… I’m the client… who’s got the $$$??? Well, the Big “F” probably has more than I do! Nuff said 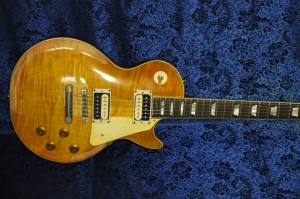