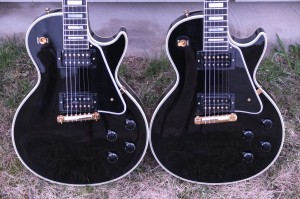 ’55 wraptails close up and personal

So, to pick up the thread, next thing I know, Pete has tracked down a second Wraptail at a music store in USA… it’s used… and it’s ostensibly the same DNA as the beast that I originally bought. Well, Pete was scooting off to his day job at the Juno Awards (yes, I do sometimes rub shoulders with the rich and famous – or in this case, not so rich and only moderately famous… but rich in spirit and famous amongst his peeps) ( … did I save that???), and since I owed Mr. F a large sum of money, I purchased the guitar for him, took delivery, and began my mad scientist experiments. 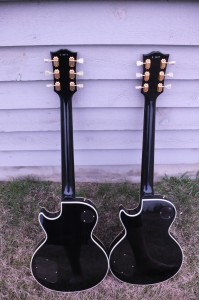 You know, you can’t really isolate a single factor and say that’s why a guitar is magical. Some are and some aren’t. It may be somewhat in the ear of the beholder – it’s a tough thing to analyze. Anywho, getting the two geetars together, Pete’s is a bit heavier (8.7lbs vs 8.3lbs) and they both sounded 90% similar and 10% different – if that makes sense. The Burstbucker 1 and 2 pickups just sound killer (another prejudice trashed!) – spec-ing out around 8.2k for the bridge pickup and around 7.55k for the neck (similar in both guitars). Initially, Pete’s guitar lacked a certain “immediacy” and “presence” that mine had. Well, I had taken the covers off my pickups – that not only gets the gold plated covers (gold covers=loss of tone=evil) out of the way, it also allows one to lower the screws in order to bring the slug coil closer to the strings and more even with the screw coil. This is a fairly strong modifier of the tone – at least on the subtle level that we are listening here. By the way, there is speculation amongst the Tone Police that the worst effect on a pickup’s tone can come from the gold plating on the covers… just sayin’. With permission, I removed the covers on Pete’s guitar and set up the pickups the same as mine – better. My wound strings seemed to have more twang and spank… “I know, I’ll put the same strings on Pete’s guitar as I have on mine!” Again, the two guitars moved closer together in tone… more spank in the low end from Pete’s guitar with the perky Cobalt strings. I should say that some of the subtle character difference between the two guitars did remain – Pete’s guitar had a tiny bit more sizzle in the high end and a little more response in the low end. My guitar had a tiny bit more in the mids and upper mids. But basically, these guitars are now 98.5% similar… or was that 97.9%… or 99.2%? We’ll have to check these two out at the next Tonefest!!! 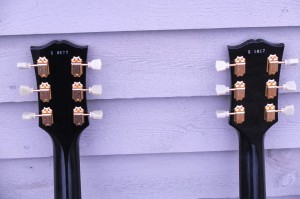