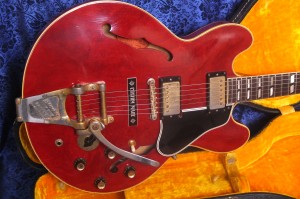 The skinny – there’s a Bigsby repair, and a re-fret, but not much else touched. Even the pickups are still sealed! I just can’t live with Stereo or Varitone, so the first thing I normally do with these is rip out the Varitone and harness and put in a premium mono harness with great caps and pots. Better tone – plus a savings on the weight – this guitar now Varitone-less, weighs in at 8lbs 5oz. I actually bought a teeny weeny little circular saw for my Dremel Tool – my best bet at opening one pickup to flip the magnet, before gently re-soldering the cover back on. You may not know this, but most ES-345s have the pickups out-of-phase. It doesn’t affect the middle position when you’re using 2 amps in stereo, but it sure does if you use one amp! When I say “most” ES-345s have out-of-phase pickups, according to my 300 series guy, Charlie Gelber at OK Guitars, this was a bit “random” at the Gibson plant, and some ES-345s actually have in-phase pickups…

Well, low and behold! It’s a miracle! This ’62 has in-phase pickups! And it’s double good fortune, because these are sealed PAFs, and although I was prepared to molest one (delicately) in the name of TONE, I actually don’t have to.

Let me add that this guitar is a monster! The tone is full yet articulate.

The Bigsby works great – SO GREAT, that I wasn’t prepared to pull off the “Custom Made” plaque and use the pre-drilled stop tail holes (often another “standard practice” for me) to ditch the Bigsby and save another 1/2 lb or so. The neck is wide and a medium depth front to back, yet it has “shoulders” – and is therefore very comfortable to play. 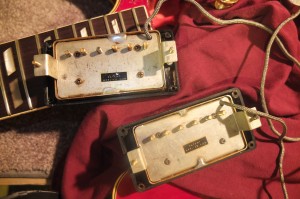 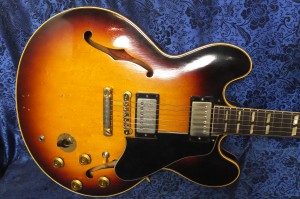 This is my third kick at the 1959 Gibson ES-345 in only the last half dozen years. I had one that reputedly belonged to Duane Allman – and I had a letter from Greg Allman’s record producer to prove it… he even said he had the original case, totally beat to uselessness… and I could have it for the cost of shipping… which I never got around to… but that’s another story!

In the later part of 1959, the necks on these beasts changed from a whopper to a more sedate “60s slim rounded profile”, and the ES-345 that I have now (courtesy of my pal Stephen S.) has the smallest profile of the 3. That may be why I just had it re-fretted in jumbo 6100 frets. “I don’t usually comment on my own fret work” said luthier Russ L., “but this one came out particularly well!”. Indeed it did! And the lack of girth is not missed as a result. 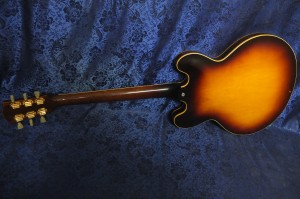 These guitars typically come from the factory both “stereo” and with a somewhat lame (at least by modern standards) Varitone with 6 different tonal positions. What I did here – and what I usually do with these guitars, at least eventually – is to take the guts out, lose the Varitone, save all the wiring, pots, caps, etc. intact (in case any future owner wants to restore the guitar to original) – and then to install a new, vintage inspired set of pots, caps, etc. This means the guitar is now in mono – thank goodness – and the Varitone is just a dummy switch (for cosmetics). What we also do here, is to save about a pound or so in weight – “light” being “right” here. This ES-345 is around 7.65lbs… and she rings like a bell – very woody!

One of the other ES-345s I owned – a particularly nice guitar that did have the whopper neck – had a particularly nasty hole cut under (and beyond) the Varitone switch. I say this to illustrate my tendency towards “guitar rescue”. Doris Day would be proud! (you may not get the reference, that’s OK). Here are before and after pics of the rescue on that other guitar: 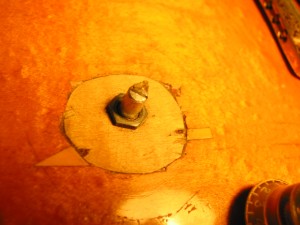 So back to this year’s project… the current ES-345 had replaced pickups – the PAFs were long gone – and for some reason, although this is an original “stop tail”, there was a long tailpiece on it for a while… leaving some extra holes in the top… these two issues got me this beauty at less than 1/2 it’s book value. She’s a “player’s guitar” now! I ended up putting in a real PAF that I had in my stash (although nickel covered and from 1962 rather than 1959), and it’s THE MAGIC in the bridge position – aggressive, woody, open… The Voodoo pickup that I threw in the neck position, while a killer pickup, turned out to be the wrong pickup for this guitar – a brighter, more open sounding pickup being, IMHO, more appropriate. I found a very cool aged gold covered Duncan Antiquity on ebay, and it’s the tone of the Antiquity that my friend Pete F. thought would work best – and I agree. We’ll see when it gets here… 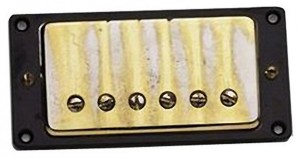 I’m also a huge proponent of “paper-in-oil” caps or anything but those ceramic disk caps! The paper-in-oil caps have a much smoother taper and a transparent tone that has a broader, wider sweep – very useful – and we now have them in this 345!!!

I’m really pleased with the changes in this vintage 345 so far… there’s a total 10/10 tone from the bridge pickup (and I can see the possibilities for the neck pickup), uber playability, lightweight ergonomics… tone that you’ll rarely find in a newer ES guitar – all good!!! I might even keep this one for a while!!! 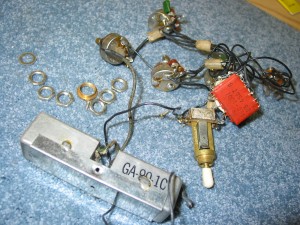